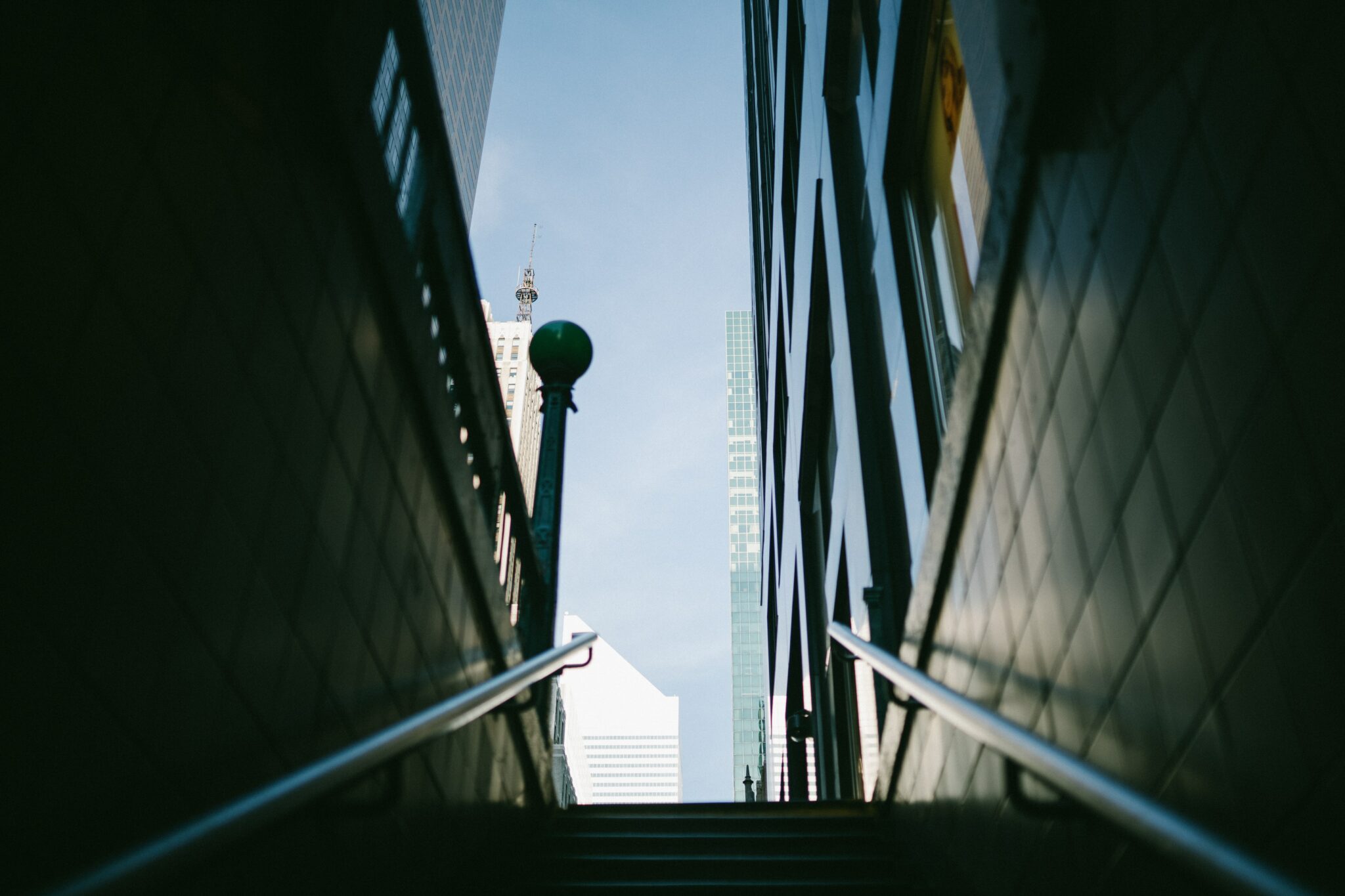 Have you ever found yourself in a situation where you were forced to get clear and to take immediate action?

Yes, and probably more than you realize, too. You likely don’t give yourself the credit that you deserve. You’ve been backed into a corner before. You could have given up, but you didn’t. Giving up would have meant automatic defeat and maybe even death.

Instead, you came up with the solution, and you acted quickly. Remember those times in your life as I tell you about what I learned from when I was in over my head and bouncing off the bottom.

Setting the Scene: The Danger of Familiarity

I was 18. I’d been to the camp before. I didn’t see any danger. I’d been safe all the other times I’d been there. I’d walked the trails in the dark. It was one of the places where I’d grown up. I’d been there every year during summer vacation since almost as far back as I could remember. Perhaps since I was 4.

One of the other boys at camp punched my mouth when I was 5 or 6. I don’t remember doing anything to provoke him. That’s one of the only times that I’ve ever swallowed a tooth. I still had some baby teeth back then. My mouth was bleeding. But I knew that things were okay. The tooth was loose anyway, and it needed to go. I felt alive.

I have many other memories of that camp and of the lake there, too.

I helped out in the kitchen and volunteered in other ways. I sprayed a Batman symbol on the outside of one of the cabins with shaving gel, which was still there years later. It was a bit reckless, and it’s the only time that I’ve ever been a graffiti artist, but again I felt alive.

I played sports there. I endured the weather, the heat and the rain. And I’d gotten to spend at least a week there at a time.

I graduated from high school the year before, and I was now working a job in retail. I remembered what had happened the year before. I got added in for random evening shifts during the week that I would have been at camp.

This time, I knew better. This time, I booked a week of vacation off so I could be at camp uninterrupted.

I was looking forward to it. I could be out of town, and I could be at a place that I had come to enjoy and look forward to being at every year.

I had gotten too comfortable. I wasn’t in the clearest head space that day at camp. And that’s when I made the mistake that could’ve killed me.

Jumping Off the Deep End: In Over My Head

I wasn’t a great swimmer. In fact, I wasn’t even a good swimmer. I took swimming lessons in elementary school, and I didn’t get past the second or third level. A big part of the problem is that I couldn’t relax enough. I couldn’t float. I had to be in water that was shallow enough where I could stand up and still have my head be above water.

I could walk in the water. I knew I could do that well enough. It’s not that I couldn’t swim at all. I could do various strokes, but my execution was lacking. Much of my effort was used on trying to stay afloat instead of on making movement in the water. It got so discouraging that I mainly made sure to stay out of the water.

The camp was at a lake. I’d been in the lake for most of the years that I’d been there. The only time I had a life jacket on in all those years there was one time when I got to do something similar to water skiing. Other than that, I’d been in parts where the water was shallow enough for me to be standing up and have my head be above water.

I’d been careful enough, even with the floating platform. I hadn’t gone off the deep end before. I knew better. But not this time. It’s amazing how a few seconds can throw things off so much.

I thought the water would be shallow enough, even on the side of the floating platform that I hadn’t been off of before. The floating platform was out further than it had been before. I didn’t think that mattered. The bottom of the lake got deeper gradually enough. Or so I thought.

If I had dived in, I wouldn’t have known how deep the water was. But I didn’t dive in. I jumped in. I jumped far. And sank right to the bottom.

I noticed right away that I was in over my head. By quite a lot. And also that I was facing away from the nearest shore. I realized that I’d made an error in judgment and that I was at a part of the lake where there was a big, sudden drop. The bottom dropped out. In all my years there, I wasn’t as familiar with the lake as I thought.

If I was a good swimmer, I wouldn’t have been at risk. But that option wasn’t available, so I had to come up with something else. Thankfully, the panic wasn’t crippling. And I quickly came up with a plan to save myself.

Making the Comeback: Bouncing Off the Bottom

I remembered that my strength with being in the water was with walking, not with swimming. I knew that I wasn’t going to save myself by swimming. I had to walk my way back to shore.

My plan was simple. I made my choice. And I took immediate action. If I didn’t take those quite literal steps, I might’ve otherwise been frozen with fear. The right action at the right time is an excellent antidote for fear.

On the bottom of the lake, I turned myself back toward the nearest shore. And I started walking.

I was determined to repeat all of that for as many times as it took to reach the shallow water. I walked. I leaped. I breathed. And I simply kept going. I knew exactly what to do, and I did it. I stayed calm enough because I had a solution to focus on.

Even if it was only one or two steps at a time, it was still progress. I saw my way out from my mistake. I focused on my strength with walking, and I ignored my weakness with swimming. Walk. Leap. Breathe. Repeat. Keep repeating.

I knew I had a winning formula. I felt silly for being in such a situation, but at the same time, it was exciting, too. I didn’t intentionally put myself at risk. It was an honest mistake, and the danger gave me a rush of some kind. It ended up being enjoyable.

I made it back to the shallow water. Back to safety. Head above water and feet on the bottom of the lake.

I breathed without interruption. I stayed in one spot without any risk. I relaxed. And I was glad that my plan worked. I was relieved.

I could’ve died, and I felt so alive.

And I must’ve made it all look really smooth. As if I had done all of that on purpose. I saw those who were on shore, the other families who were at the camp. None of them were panicked. From what I could tell, none of them noticed what I had just been through.

I felt like more of a stranger than ever. Where were those bonding times with others? I graduated high school, and my connections seemed to be gone. Or had we been drifting apart so gradually over the years that I didn’t notice?

Dealing with the Aftermath: What Have I Learned

Of course, the experience shook me. I still remember it vividly even though it happened 16 years ago in August.

That was one occasion where it was clear that either I could give up and die, or I could take some simple actions and apply them over and over again until I was safe.

I’ve learned that there isn’t any single decisive action that makes all the difference. It’s the combination of actions that makes all the difference. Life is filled much more with the seemingly unimportant moments than with the more obvious life or death situations. It’s up to me to be more aware that each moment contains within it the seed for change. The seed for growth. The seed for transformation. It’s up to me to see that and do something about it. Whatever that is.

When have you come up with a solution and acted quickly?

Likely more times than you give yourself credit for. It doesn’t have to be when your life or when somebody else’s life was at stake. It could’ve been something much more subtle than that.

It might’ve been something where you made a mistake and you ended up in an undesirable situation as a result. But you saw the way out or under or through or over or around. And you took it. You took the necessary action, and you emerged from that stronger than ever. Whether or not you realized it at the time.

What looked like a mistake may be exactly what needed to happen so that you would reveal who you really are.

The point of all of this is to show that you have hidden strengths within you. And when you focus on those, you can achieve wonders. You can save your own life. You can save other’s lives. You can transform the world, one life at a time.

You can do it if you believe you can and if you take action based on that belief. I’m cheering for you.